The Bata Children’s Programme (BCP) was launched in 2010 to bring all Bata community initiatives focused on helping disadvantaged children under one umbrella, allowing for greater cohesion and impact.

Since 1894, Bata has been committed to contributing to the well being of the communities and countries in which it operates.

The BCP believes every child should be provided with opportunities to help them reach their full potential and aims to make a positive impact in their lives and the lives of those around them. Our mission is to create a brighter future for needy children in our communities.

Our approach is to tackle children’s global concerns locally by involving our Bata companies and employees as volunteers.

Bata fosters a unique corporate culture of service where employees are encouraged to play an active role in making our communities safer, stronger and more innovative places in which to live and work.

The Bata Children’s Programme has identified four key areas of development for children where we can make a difference: Education, Health & Safety, Living in a Sustainable World and Mentoring & Skills.

Currently, the Bata Children’s Programme has carried out more than 100 initiatives in 22 countries, with the help of over 1000 volunteers, reaching out to 25 000 needy children. 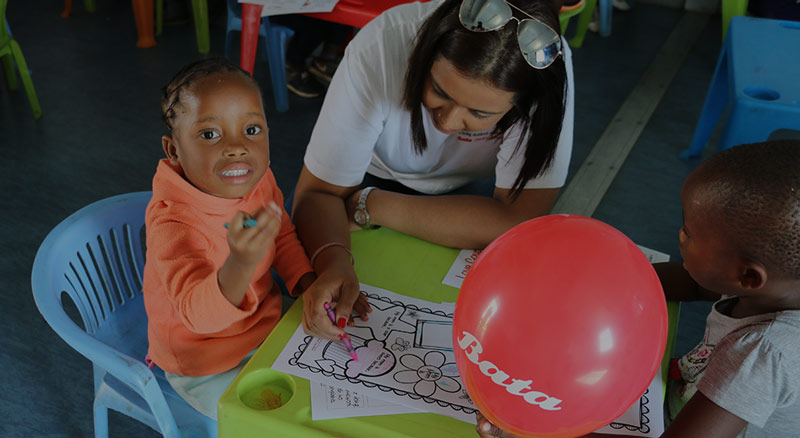 Bata Children’s Programme South Africa in partnership with Project Build constructed a new school for Sihambakancane School, which caters for the needs of disabled children from the surrounding communities.

The initiative provided the school with a new building with two classrooms, a storage room, a kitchen and four new toilets. The children also received donations of school shoes, school books and supplies and Christmas gifts.

In another initiative, a competition was launched where consumers were invited to nominate a school that needed upgrading.

Brookdale Primary School, in an underprivileged suburb of Durban was announced the winner. The school currently has 1730 pupils, of whom 973 are orphans and 360 of those belong to child-headed families. The school gets very little assistance from the government in terms of a yearly grant because it has been classed as a fee-paying school, however, the community is so poor that a mere 3% can afford to pay the school fees.

BCP SA helped build a new Grade ‘R’ wing so that the children don’t have to hold their classes outside under the shelter of a veranda any more.

BCP SA has a close relationship with Qhubekani Pre – School in the Loskop area. Numerous visits are conducted throughout the year to enrich the lives of the children.

In 2016, BCP SA not only donated kitchen and toilet units to Qhubekani Pre – School but BCP volunteers visited the school together with local clinic sisters on Wellness Day. The children were de-wormed and given vitamin A , basic eye and dental check-ups and referrals were given were necessary. In December, volunteers hosted a Christmas party and handed over winter hats knitted by them.

Other projects undertaken include having Grade 12 students from Enkomokazini Tech visit the Bata Loskop factory where they spent time in our laboratory and workshop to experience the work environment.

This website uses cookies to improve your experience while you navigate through the website. Out of these, the cookies that are categorized as necessary are stored on your browser as they are essential for the working of basic functionalities of the website. We also use third-party cookies that help us analyze and understand how you use this website. These cookies will be stored in your browser only with your consent. You also have the option to opt-out of these cookies. But opting out of some of these cookies may affect your browsing experience.
Necessary Always Enabled
Necessary cookies are absolutely essential for the website to function properly. These cookies ensure basic functionalities and security features of the website, anonymously.
Functional
Functional cookies help to perform certain functionalities like sharing the content of the website on social media platforms, collect feedbacks, and other third-party features.
Performance
Performance cookies are used to understand and analyze the key performance indexes of the website which helps in delivering a better user experience for the visitors.
Analytics
Analytical cookies are used to understand how visitors interact with the website. These cookies help provide information on metrics the number of visitors, bounce rate, traffic source, etc.
Advertisement
Advertisement cookies are used to provide visitors with relevant ads and marketing campaigns. These cookies track visitors across websites and collect information to provide customized ads.
Others
Other uncategorized cookies are those that are being analyzed and have not been classified into a category as yet.
SAVE & ACCEPT